The Kennedy assassination is one of cinema’s deepest, darkest obsessions. Most moviegoers and history buffs have seen or at least heard of Oliver Stone’s controversial restaging of President Kennedy’s assassination, but his was neither the first nor the most recent re-enactment of this unspeakable tragedy. The assassination sequence has been recreated by a various different parties for an equal variety of reasons.

In the 1960s, the FBI, Secret Service, and Warren Commission used filmed recreations of the assassination to generate their hypotheses and conclusions regarding the case. The 1970s and 80s provided viewers a slew of assassination restagings in several television movies made during this time period. Some of these are of rather poor quality, while others stand up quite well to this day. In 1991, Oscar-winning filmmaker Oliver Stone raised the bar of quality for reenacting the Kennedy assassination. Whatever you think of Stone’s conclusions as a theorist, his recreation of the Kennedy assassination is doubtlessly the most meticulously detailed and emotionally stirring of all reenactments so far.

As the pain and shock of the Kennedy Assassination began to fade in the 1990s into the 21st century, the event was restaged for darkly comic purposes. Most recently, the Discovery Channel put together a recreation of the assassination sequence, only to be sharply criticized by several prominent researchers. Here JFK007 lets you compare and contrast the different restagings of the Kennedy Assassination and it’s aftermath in one place. Which is the most accurate recreation, and which the most flawed? Which is the most hokey, and which the most stirring?

The Secret Service, FBI and Warren Commission were among the first to roll camera in Dealey Plaza, as they attempted to determine the origin and timing of the shots which killed President Kennedy and wounded Governor Connally. The Secret Service shot a crude recreation in late 1963, as the nation was still reeling from the loss of JFK. While sparse and inaccurate compared with subsequent efforts to recreate the events of November 22nd, the 24 minutes of Black and White footage shot by the Secret Service was the first attempt to use motion pictures to solve the mystery of JFK’s murder.

In May 1964, as the FBI was helping the Warren Commission gather evidence and testimony to help with their investigation, the government decided to take the Secret Service’s efforts one step further and reenact the assassination with a bit more detail, and for the first time, in color. The FBI re-enactment still had some serious problems, but should be lauded for its attempt to recreate the shooting angles of the various amateur filmmakers who captured the actual event. Abraham Zapruder and Orville Nix captured the assassination sequence from opposite angles of the Plaza, and the 1964 reenactment was shot from their two positions.

Barely a decade after the assassination of John Kennedy, Hollywood filmmakers made their first attempt at re-enacting the tragedy with 1973’s political thriller Executive Action. The film was the first mainstream narrative film to put forth conspiratorial accustations regarding the assassination, and was criticized heavily at the time of its release. Unlike the government recreations, which were created to demonstrate how one man could have done all the shooting, Executive Actions‘s recreation of the events in Dealey Plaza demonstrates how three shooters could have accomplished the task with a triangulation of fire. The film was obviously shot with limited financial means, and much of the footage portraying the shooters is clearly shot in cutaways staged at locations other than Dealey Plaza. It’s an old cinematic trick, but since audiences are familiar enough with the real Dealey Plaza, it doesn’t work here. While the filmmakers used documentary footage to anchor their recreation in reality, a preponderance of anachronistic vehicles, hairstyles, and scenic elements prevents a seamless blend between reenactment and reality. The bulk of the film is dedicated to telling the story of wealthy industrialists and ultra-right-wing political philosophers who decide that President John F. Kennedy’s policies are destroying the country and he in turn must be assassinated. A massive conspiracy is set in motion, with two teams of shooters simultaneously being trained as an Oswald “double” is created to implicate the real Oswald in the assassination. As the Kennedy motorcade rolls through Dallas on that fateful day, the conspirator characters in Executive Action bite their nails in anticipation as a disappointingly low-budget recreation of the assassination unfolds.

In 1975 a performance art collective called The Ant Farm controversially recreated the tragedy in Dealey plaza. A film of their efforts titled The Eternal Frame was made of the performance, but can only be seen at occasional screenings and museum exhibits. The real interesting aspect of the film is not the reenactment itself, but the reactions of the innocent bystanders who are forced to relive a horrible national tragedy.

These two restagings, the first from the television miniseries Kennedy and the other from the television film The Trial of Lee Harvey Oswald, are two of the few dramatizations with no clear thesis as to who fired the fatal shots. Kennedy, which features Martin Sheen and Blair Brown as the President and First Lady, focuses on the mayhem which occurred in within the limousine during the shooting, while the restaging from The Trial concentrates on the panic which ensued in the crowd during and after the volley of shots.

Note how in the second clip, the camera focuses on witnesses hearing shots from both the Knoll and the Depository.

The conspiracy-themed television series The X-Files restaged the Kennedy assassination in one of their most intriguing episodes. In their take on the assassination, the head shot was fired from a shooter in the storm drains below the motorcade, with Oswald drinking his infamous soda pop at the time. (Youtube embedding unavailable, click on image to view a link of the scene). 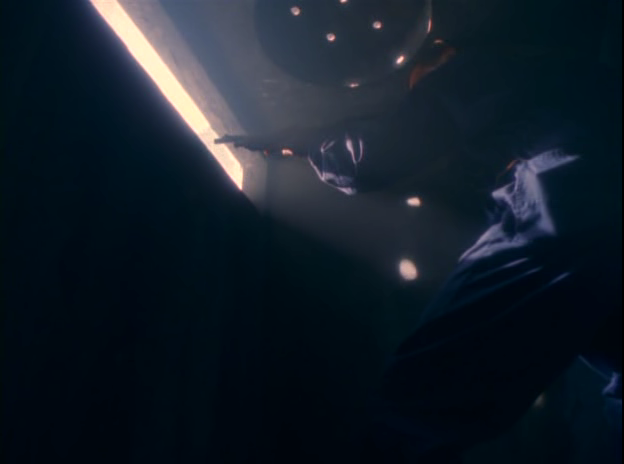 While the graphic novel The Watchmen only briefly mentioned the Kennedy assassination, the film adaptation featured a disturbingly accurate depiction of the assassination sequence, with the fatal shot being fired by “The Comedian” from the grassy knoll.

The 1980s reboot of the classic Twilight Zone television show featured an interesting episode entitled Profiles in Silver (a reference to the Kennedy half dollar the protagonist keeps in his pocket) where a time-travelling descendant of President Kennedy accidentally disrupts the space time continuum when he uses his foreknowledge to prevent the President’s death. His solution to his problem is harrowing to say the least. Watch the first of three parts of the episode below.

Two of the lesser known restagings of the Kennedy assassination are perhaps the most controversial, because they are portrayed for comic purposes. The first is from the British sci-fi sitcom Red Dwarf, and it’s thesis is probably the most brilliant of any video featured here. In their version, the show’s protagonists time travel to Dallas on November 22nd, 1963 and accidentally alter history by preventing Lee Harvey Oswald from killing the President, ironically creating a nightmare version of America. In order to restore the space time continuum, President Kennedy is forced to assassinate himself, and we learn that JFK was actually Badge Man! Despite the comic premise, the show’s producers stage the assassination with a remarkable amount of reverence for President Kennedy, and his tragic murder.

More recently, the sketch comedy troupe The Whitest Kids You Know produced a skit in which the First Lady is an overweight man in drag and Oswald sings a musical number with the President before he is murdered.

Rock and Roll icon Marilyn Manson loves to play with controversial topics and this little-known music video is no exception. The video features Manson as the President and his former lover Rose McGowan as the First Lady in a goth rock nightmare version of the Kennedy assassination.

The infamous miniseries starring Greg Kinnear recreates the assassination by cutting between the motorcade, Oswald, and scenes from the Kennedy family elsewhere. It’s reverent and effective, but a bit hokey. Watch the full episdode below.

The assassination is back on TV with the extremely melodramatic “Killing Kennedy”. This interesting behind-the-scenes clip shows how the infamous assassination was reconstructed on a soundstage. The filmmakers behind this project seem more interested in creating beautiful visual poetry than accurately depicting this historic moment and the film is awkwardly miscast.

Parkland offers a unique reenactment of the assassination which focuses on the reaction of Abraham Zapruder to the shooting rather than the President or his assassin. The rest of the film centers around the actions of lesser-known figures involved in the tragic events of November 22nd, 1963 such as the trauma room doctors at Parkland Hospital, the Secret Service and FBI agents in Dallas as well as Oswald’s family.

Spike Lee’s 1992 film “Malcolm X” intercuts a recreation of the Kennedy assassination with comments from the titular character, ably portrayed by Denzel Washington. Malcolm X took considerable flack from the mainstream media when he stated that the President’s assassination was an example of “the chickens coming home to roost”.

The music video for Lana Del Rey’s “National Anthem” is rich with visual references to the Kennedy years and the President’s assassination, as seen through Jackie’s eyes. ASAP Rocky appears as JFK while Del Rey plays both Marilyn Monroe and Jackie Kennedy.

THE HOUSE OF YES

Based on the play by Wendy MacLeod, “The House of Yes” tells the story of an incestuous  brother and sister who were so deeply traumatized by the Kennedy assassination that they recreated the tragedy over and over again in their living room as children.

As adults, the two are reunited and decide to play their dangerous game once more, much to the disgust of the brothers’ fiancee, who watches in horror from the next room.

Eventually, the game leads to tragic results as the sister takes drastic measures to ensure that her brother never leaves her alone again.

Lee Daniels’ The Butler does not portray the actual assassination but rather the titular character’s reaction to the event as he serves a grieving Jackie Kennedy. The film follows the cliché of using Walter Cronkite’s report as the framing device for the event.

The 2016 film Jackie starring Natalie Portman as the titular First Lady presents one of the most graphic depictions of the fatal headshot to President Kennedy.

In this bizarre scene from “The Salton Sea” several of the characters stage a macabre reenactment of the Kennedy assassination with pigeons in a remote controlled car. This is undeniably the strangest reenactments of the assassination this author has ever seen.