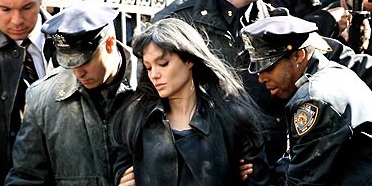 The new spy yarn Salt, starring Angelina Jolie and helmed by Mace Neufeld, the director of Tom Clancy epics Clear and Present Danger and Patriot Games, puts a salty new spin on the Kennedy assassination. Secret soviet murder squads and diabolical doubles have always been part of JFK assassination lore, but this particular film plays up the concept with a sort of morose whimsy. According to the film, Lee Harvey Oswald was replaced with a Russian double during his brief defection to the Soviet Union. The double, named Alec, was from the charter class of a school which raised perfect assassins, trained to infiltrate American society and wreck havoc among its citizens. The references to the assassination of President Kennedy were broad enough for the general viewer, but accurate enough to satisfy an assassination buff.

Salt is the latest in a slew of recent films and television programs which reference the Kennedy assassination. Last summer, the Kennedy-esque characters in AMC’s 1960s drama Mad Men, who had a raucous party the night of JFK’s election, are forced to attend a wedding the day of JFK’s murder. Even the beef-brained Mark Wahlberg action vehicle Shooter had a few clever references to the Kennedy assassination. In the film, Wahlberg’s character Bob Lee Swagger is on the run, falsely accused of attempting to murder the President. At the thought of finding the real gunman behind the crime, an old man tells  Swagger “them boys on the knoll were buried within the hour.”

Most people of my generation understand the Kennedy assassination from what they see on TV, movies, and YouTube. Every year, network and cable television produce a steady stream of documentaries on the assassination of President Kennedy, most of then portraying Lee Harvey Oswald as the lone gunman. Hollywood, on the other hand, is always conjuring up ingenious explanations for the Kennedy assassination. JFK, Captain America, Salt, Shooter, The X-Files, The Twilight Zone, Bones, Red Dwarf, the Whitest Kids You Know, Marilyn Manson, and numerous other films, television programs, and even a Broadway musical tell us we’ll never really know what happened, and maybe we never will. YouTube users are constantly firing back with alternate interpretations of the Kennedy assassination, with fingers pointed at everyone from JFK’s limo driver to the Vice President. The event itself was it’s own program, featuring America’s first live televised murder, and the world’s first viral video. The 8mm film captured by Dallas dress manufacturer Abraham Zapruder.

In contrast, most elementary and high school history books typically devote a sentence or two to President Kennedy’s assassination, even though it is perhaps the most important event in the tumults of the 20th Century. Schoolbooks most often state that Lee Harvey Oswald acted alone in the crime, and at most mention that there are other theories. In short, students are often not adequately equipped to sort through the noise they get about the assassination on TV. The textbooks are obviously failing our students, because only 1 in 10 Americans believe what they say about the assassination. If the textbooks are correct and the majority of americans are wrong, we need a better way to teach ourselves about the most important murder since the crucifixion. Conversely, if the masses are right and the government is snookering us, we need new textbooks. Hollywood is telling us that someone staged the whole assassination like it was a tasteless performance art piece, network television insists that anyone who questions the government’s story is so crazy, they might as well believe aliens killed the President. “Reality,”  legendary alien-wrangler Captain Kirk once said, “is probably somewhere in between.”